Glintshake is really something else – The entirety of the band. Two amps tall. Forty acres high. Six pounds wide. It’s evident – they’re all played out. Keeping it to a beat of 5/8. They write songs. Directly to your mailbox. “Fifteen to five,” “Hands are Former Legs”. Their crystal glass sound will shatter your glasses. Their fire will burn down your bouillon.

I walked up to them and asked, “Hey, is it true? Your band’s name…is it a combination of the first letters of your name? So we have Katia, Zhenya, Egor, Lyosha…”

Zhenya: No, actually I just wrote out some words. And with Katia we decided, “Oh, Glinthshake’s not bad.”

All the listeners who keep up are aware that Zhenya gets the inspiration for his poems from greeting cards. You know, the ones you get at the Rospechati *? For your grandchild’s birthday or your favorite son-in-law. Do you have some other sources of inspiration besides the most obvious?

Zhenya: Yes I do. Like for example, we’ve recently gotten into Kandinsky’s poetry. He’s of course not as short spoken and figurative as a greeting card but he’s got some very interesting writing. Very visually forward. Like he is painting a picture through words and even letters themselves.

Katia: Well, Kandinsky was a hell of a synesthete. He even has paintings with titles like “Composition V,” “Composition X.” Like he was creating music, but with paint. And the poems are kind of like that.

And who was Zhenya inspired by in terms of guitar?

Zhenya: You know, I guess Page, at 15 years old made quite the impression on me. Technical fuckeries always drove me crazy. In the spirit of say, Blackmore. Why would you even bother? It becomes a kind of competition. Not music. I was always fond of those who could work with sound. More so than the technical game.

If you had to perform in front of your former classmates, where would you hold the gig?

Katia: I would play in the school cafeteria – that would be cool!

Does the cafeteria have some memory attached to it?

Zhenya: For me it’s butter stuck to the ceiling. Well, you know, you take a knife, put some butter on it, pull it back…and shoot it towards the ceiling. And there it hangs. For a long time. Then it falls on somebody.

Katia: We just threw potatoes around. Mashed potatoes. We would grab it by the handful and throw ’em.

Zhenya: The cafeteria is a dangerous place.

Katia: No, the cafeteria is cool. The aesthetics are great.

Zhenya: Our cafeteria had a mural about physics, chemistry…by way of social realism.

Katia: Our entire wall was Vasiliev.

Katia: No, Konstantin Vasiliev – that guy who painted warriors, knights…

And what about a venue? Where would you like to perform?

Zhenya: I always wanted for concerts to take place somewhere where it would be unsuitable.

Katia: Like the metro. I would like to play, for example on the Komsamolskaya*. It’s very beautiful

Zhenya: Assuming that the sound there would be OK.

Zhenya: It’s actually very cool when you come out to the public. One time we played with Stoned Boys. At the City of Moscow Day celebration. On the Revolution Square. It was totally far out. Tajiks dancing with bags, they were old grandpas…I mean, the music was strange, wild, but people took it very sincerely. Walking around, being out, and then all of a sudden – something caught them. That’s awesome. 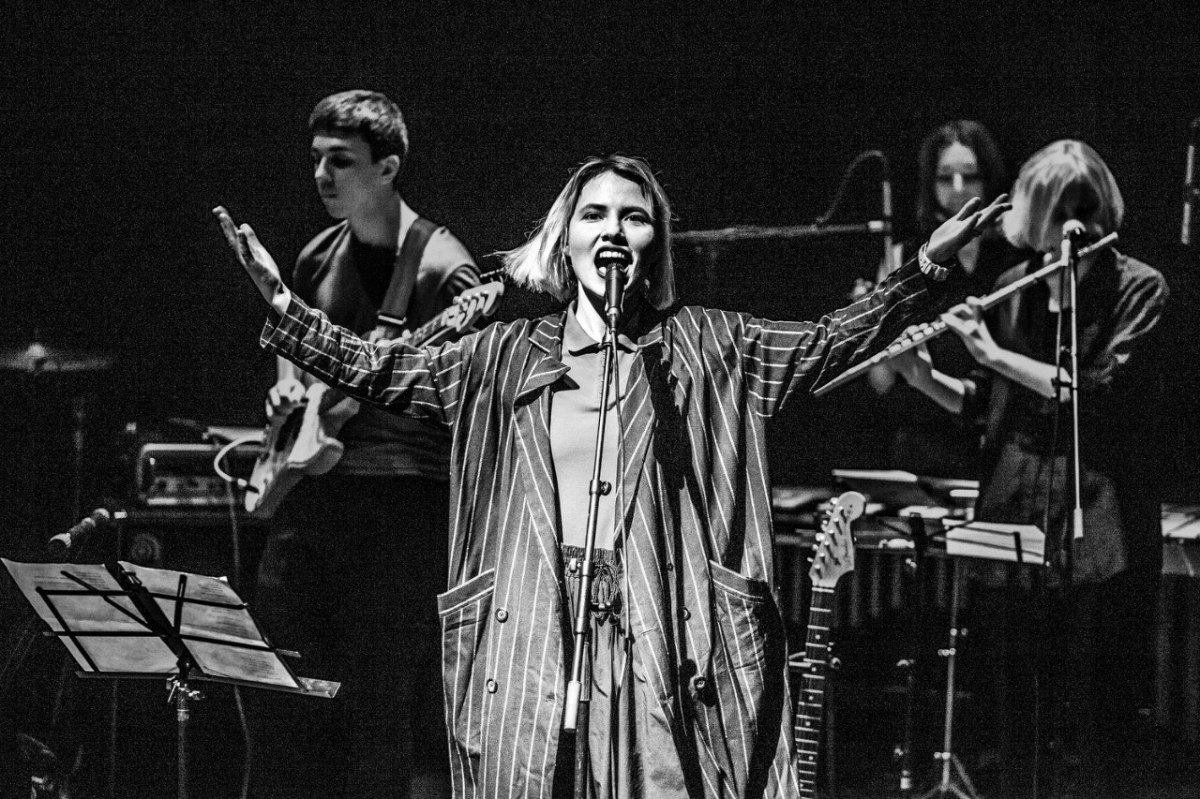 Did you go to music school as kids? To go and have a laugh or to actually learn something yourself?

Zhenya: My mom told me, “It’s cool if you know how to play an instrument.” I agreed.

Which instrument did you have?

Katia: I first enrolled when I was six. First on the piano, and then I switched to choir. But the funniest part is that once I finished, I enrolled again. For the guitar of all things. Not classical, but Estrada. It was hilarious! I remember the first song that I had to learn was “Autumn” by DDT (Осень, ДДТ). It was a total fail. I never listened to any of that. I mean never. It was incredibly dumb. Anyway…

Zhenya: Katia learned about DDT from within.

The other day, my little brother came to me and asked, what is Russian guitar constructivism. I didn’t know if I should hit him on the mouth or sit down and discuss it all like adults. How would you explain this to your little brother?

Katia: It should have been approached like a thing…

Zhenya: Actually we were talking with Osmolovsky. He’s a well-known artist. For example, at 19, he would go out to the Red Square and spell out “Dick” using his friends as material, even climbing Mayakovsky…He’s done a lot of stuff. So we were getting into it one time, and it turns out he was a huge Glintshake fan. At that point we were trying to hype up our German tour. And he said that we had to come up with something for the poster. So that everyone would get it. That it would be something interesting. That’s when we came up with the thing about Russian guitar constructivism.

Zhenya: Damn, that’s really difficult. Any kind of comparisons are difficult. On the one hand, the person think, “Oh I know what this music is! I’ve already heard it a hundred times.” But on the other hand, if you take the band “Bravo” and “Glintshake,” and you ask, “so how are they similar?” It’s unlikely that he’ll get to any conclusions. Like, people would write that the track “Hands Are Previous Feet,” is similar to Auktyon. I don’t know. If you’ve only listened to Auktyon, then…maybe.

Katia: To me it seems the reason they think that is because the track came out with a picture of ЦДХ, and I was wearing a jacket, and everyone took this as a reference to Garkusha. Although I don’t think we have anything in common with Auktyon…

Zhenya: I don’t think the comparisons are bad. Anything is better than Radiohead.

Zhenya: We’ll survive. Although some comparisons are discouraging. Like there is a comment on YouTube, my favorite, on “Fifteen to Five,”“reminds me of good old trip hop.”

Do you have any other favorite comments?

Katia: My favorite comment – on a guy’s YouTube channel, who films our concerts with this funny camera…anyway, it’s a regular digital Olympus camera, but you only have 600 pixels. And it has a wild zoom. So we made a Readymag with our videos, and there’s a comment, “I’ve fucking had it with your modern art, for fuck’s sake.”

In one of your interviews, you said that the goal of Glintshake is to make your own musical language. Sergei Kuryokhin had the same goal when he created Pop Mekhanika. He used shovels, armor, sticks of some kind, Tsoi…to create a musical language. What are you ready to use?

Zhenya: I think every musician should aspire to this. To find one’s own musical language. Like Olivier Messiaen, who would record the songs of birds and transcribe their notes. He learned to write music, roughly speaking, from birds. And that seriously differentiates him from other composers.

That’s regarding the musical tongue. What about the musical mouth? Otomatone. Tell me about your experiments with that.

Katia: I wouldn’t say that it’s some sort of brilliant musical instrument. More like, a toy with a rubber…how would you say it?

Zhenya: I don’t even know.

Katia: Actually it was a gift I got in America. When I had my residency. They told me it was a “sperm sax.” We were laughing about that a lot. I was playing with the guys, there was a double bass, another sax, a Theremin, and me. We played at some school, an art school. There was a huge stage, lots of kids, parents…and the guy who introduced the group, saying that I play the “sperm sax.” And there was a pause in the auditorium. They all looked at each other and then laughed. One of our leaders fell over! She thought, “Oh, God, we’re done, why did he say that?” But it was really funny.

You know, musicians, they sometimes go through a puberty stage: when they’re young, they play in increments…then they regret it. Do you regret anything right now?

Katia: I read this cool interview with Anthony Kiedis. I was still in school. Back then I was listening to a lot of RHCP. And there, he says that he’s not embarrassed about anything that he did in his youth. At that moment, I thought that he really had nothing to be embarrassed about. And I thought, “Wow. That is so cool! This guy did so much shit, and then says, well, yea, I was like that.”

Zhenya: You couldn’t have been better.

Katia: You change, and that’s normal. And to deny yourself of the past – it’s so stupid and narrow-minded that I don’t get why you would do it.

Ok, and a final question. But it’s very important! 93% of Virginia readers are people who wouldn’t know what to do if their closet grows a nose, or they find that in their sleep, their arm has rolled off under the refrigerator. What advice do you have for them in the future?

Zhenya: The most important thing – don’t listen to Matrixx.

Rospechat'(Роспечать): A Russian company specializing in the distribution of periodicals and related products. Established in 1994 as a result of corporatization of the Soviet subscription and retail trade monopoly agency “Sojuzpechat” (Союзпечать)

Splean (Сплин): is a popular Russian rock band. They were formed and released their first album in 1994. Since then, they have remained one of the most popular rock bands in Russia and the former Soviet Union. The band’s name is derived from “spleen” (in the sense of “depression”), and the “ea” spelling in English is a pun on the spelling of the Beatles. It was borrowed from a short poem by Sasha Cherny, which the band set to music.

Komsamolskaya (Комсомoльская):  a Moscow Metro station in the Krasnoselsky District, Central Administrative Okrug, Moscow. It is on the Koltsevaya Line, between Prospekt Mira and Kurskaya stations.

The station is noted for its being located under the busiest Moscow transport hub, Komsomolskaya Square, which serves Leningradsky, Yaroslavsky and Kazansky railway terminals. Because of that the station is one of the busiest in the whole system and is the most loaded one on the line. It opened on 30 January 1952 as a part of the second stage of the line.